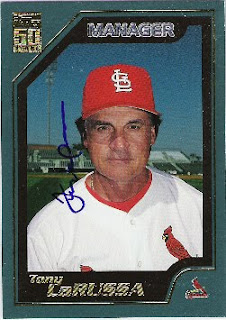 After 16 seasons as manager of the St. Louis Cardinals, Tony La Russa retired following 33 years managing in the big leagues. La Russa retires as one of only two managers to win a World Series in both leagues.

There isn't one [factor] that dominates [my decision]," La Russa said. "They all just come together, telling you your time is over.

"We went through the season, and I felt that this just feels like it's time to end it, and I think it's going to be great for the Cardinals to refresh what's going on here."[...]

For the time being, La Russa does not have a next job in line. He does not expect to return to the organization but indicated that he had some interest in continuing to work in baseball.

Mozeliak acknowledged that he has a preliminary list of people in mind to be the Cardinals' next manager, but he made it clear that he expects that list to change in the coming days. Mozeliak did not rule out any possibility for the next skipper, from internal candidates to managers not currently with a team to coaches or managers with other teams.

As Matt notes, La Russa joined Billy Southworth as the only Cardinal managers with more than one World Series championship.

In 16 seasons with the Cardinals, La Russa won 1,408 games, and led the Cards to 9 postseason appearances, including winning the NL pennant in 2004, 2006, and 2011. La Russa retires with 1,408 wins over all, good enough for second place behind Connie Mack (3,731) and John McGraw (2,763). While many of us Cardinals fans thought the skipper would have decided to manage to the point where he would finish second all-time, it was never in La Russa's plans as Matt notes here:

La Russa said that he did not consider continuing in order to get the 36 wins he would have needed and pass McGraw on the all-time list.

"I'm aware of the history of the game," La Russa said. "But I would not be happy with myself if the reason I came back was to move up one spot. That's not why you manage...it's not something that motivates me. Wherever you finish, you finish."

You can send a note of thanks to Tony La Russa here.
Posted by Danielle Solzman at 6:43 PM